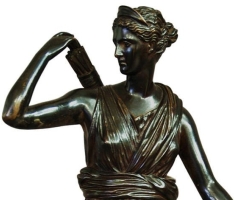 Ernst Leopold Foundry of Blansko has created over the past 200 years many casts of the great men of their time. Majority of them were men but on the occasion of International Women’s Day we would like to remind one of the famous cast iron lady: Diana of Versailles.

The statue of Diana of Versailles comes from the period before the 1st or 2nd century after Christ. It is originally a marble statue of the Roman goddess of the hunt and nature Diana with a deer. The statue shows Diana on hunt, with raised right arm she draws an arrow from the quiver which is preserved only partially between the horns of the deer. She wears a short Dorian chiton and sandals on her feet. The statue probably comes from Hadrian’s Villa at Tivoli.

The statue was in papal collections in Rome in the 16th century. In 1556 it was given by Pope Paul IV to Henry II of France to the king’s mistress, Diane de Poitiers. The statue has long been at the Fontainebleau Castle where it was part of the renowned sculpture exposition. In 1602 Henri IV removed it to the Palais du Louvre and soon the French sculptor Barthélemy Prieur made a bronze replica cast. This replica was together with bronze hunting dogs and stag’s heads set back at the Fontainebleau Castle upon a high Mannerist marble pedestal arranged by the hydraulics engineer Tommaso Francini.

Around 1817 bought the statue of Diana of Versailles Hugo František Salm-Reifferscheidt right in the Louvre and took it to Blansko where casting sculptures were begun to cast according to her and became a favorite item of the catalogs at that time. In the Czech lands is the cast iron sculpture of Diana of Versailles located in the gardens of the classicist chateau in the spa town of Kynžvart.

Diana of Versailles was one of the largest statues casted by the founders of Blansko in the nineteenth century. It measured just over two meters and the weight was close to seven hundred kilograms. It belongs definitely to the golden treasure fund of the Blansko artistic castings.